The Summer of Trump: Clown, Gasbag, Monster, Anti-PC Hero, and Other Images of THE DONALD

An update on a new image that emerged: The Fall of Trump: A New Image of the Donald

Like many observers this summer (and heading into fall), I have been fascinated by the rise (and continued buoyancy) of Donald Trump.  And like many, I considered him a joke at first.

Early in the Trump Era ™, political cartoonists, like late night hosts, were excited to have Trump for fodder.  And what is not to love (for a comedian): the hair, the brashness, the class, the near-constant stream of material… it’s the Donald.  He was a walking punchline before he entered the race.

Especially for cartoonists: the hair. Earlier this summer, I was riding in a van in Oakland with Yakov Smirnoff, and he mentioned getting his start at a Trump casino.  Someone said, “you mean our next president.”  To which he replied, “no, he shoots his foot… into in his mouth…shoots himself in the…”  Yakov, as you may know, has built his comedy career out of his encounters with America as a foreigner, including struggles with idiom.  So I helped him out, “you mean, he puts his foot in his mouth, then he shoots it.”  And that is the story of how I mad Yakov Smirnoff laugh

In looking at political cartoons of Trump, it is clear that his image has shifted from that of sideshow clown.  As the summer progressed, the humor of cartoons shifted from a making fun of Trump or mocking his effect on the Republican Party to ridiculing him for his bombastic rhetoric.  To many observers–both left and right–Trump has become less humorous as his supporters have shown more serious support.

Reflecting more general reactions people have had to Trump, political cartoons can be grouped into a few different areas: criticisms of a variety of types, immigration-related images, Spanish-language reactions, Republican party reactions, pro-Trump, and comparisons to Democrats, especially Sanders, but also Clinton and others.  Finally, there are a few, but not many, pro-Trump cartoons, although some of the cartoons focus on the question of “political correctness,” and are only borderline positive.

Critical cartoons tend to break down into those that focus on Trump in general, either as a windbag or as resistant to criticism.  Others focus on Trump’s supporters–their anger or their cultural positions.  Very few seem to focus on the seeming inconsistency of Trump’s positions, although many focus on his general temperament.

General criticisms of Trump and his candidacy are numerous, but other cartoons have taken him to task in specific areas.  A good number of cartoons, but maybe not as many as might be expected, focus on Trump and women.  More focus on Trump’s views on immigration and what his language and policies mean for him and the Republican Party. An interesting subset focuses on immigration and Native Americans–a trope that seems to be a popular one. And building from his views on immigration, a good number of cartoon’s specifically call out Trump for his perceived racism. Finally, I have included a gallery of Spanish-language cartoons.  My Spanish is not good, so I will leave interpretation to others (Gracias to Pilar and her friends, but not Danny*).  Here are four galleries of samples of those cartoons:

If you add up the critical cartoons, including those focused on gender and race, you would probably have almost 50% of the cartoons.  The other half is roughly dedicated to the effect that Donald Trump is having on the 2016 presidential race.  Many focus on his effect on Republican Party, mostly negatively, while others link him to Bernie Sanders, Hillary Clinton, or other Democratic politicians.  Here is a big gallery of those images.

Trump and the Republicans

Trump and the Democrats

And, finally, a small number of cartoons are pro-Trump.  Here is a sampling (I put cartoons about “political correctness” here, although they may be critical, but to Trump supporters, they would be positive… I might guess): 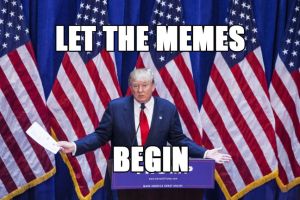 No, really, we don’t have time for memes. 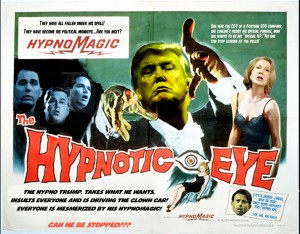 It’s truly hypnotizing.  I can’t stop searching for images of Trump. I started this project several weeks ago, and each time I work on it, new images pop up.  I don’t necessarily aim to be complete, but I will add new images as I see them if I find them interesting. 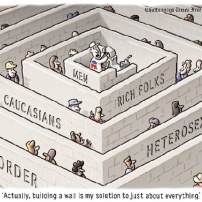 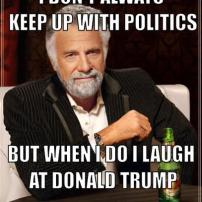 And many more new since…

All images used as fair use for educational purposes.  Copyright obviously remains with the cartoonists.  Support your local and national and international cartoonist.

*Liberal clown Danny calls me to ask for favors and then mockingly smiles when told of my high poll numbers. Fading out fast. Like @Rosie O’Donnell, a total loser!