Born June 28, 1946.  This sketch was played on Saturday Night Live in 1989 following Radner’s death from Ovarian cancer, as introduced by host, Steve Martin.

Editors’ note:  We are re-blogging this post from Sharon McCoy in honor of Paul Laurence Dunbar’s birthday: June 27th.

Last year we  posted the poem “An Ante-bellum Sermon” from Paul Laurence Dunbar’s collection, Lyrics of Lowly Life. This week’s poetry entry discusses the historical, literary, and cultural context of that collection and its core humor.  The bold red titles below indicate live links to those songsheets, audio files, or websites.

Dunbar can be difficult in many ways.  His dialect can seem heavy or (to some ears) stereotypical, especially once you know that he wrote for performers who appeared in blackface.  We often resist humor in poetry, but blackface offers special challenges that make it difficult for many to want to take Dunbar seriously as a poet.  Songs such as Evah Darkey is a King and Who Dat Say Chicken in Dis Crowd can be hard to stomach in the twenty-first century, and even his serious, beautiful dialect pieces such as  On Emancipation Day are packaged with lurid period sheet-music covers that wrench credibility. 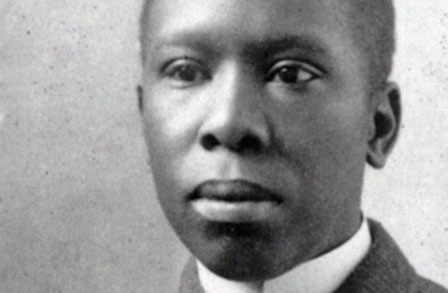 None of this was news to Dunbar.  But the era he was writing in offered special challenges in any case.  He was born in Dayton, Ohio in 1872, the son of former slaves, just three years after his home state sent a resolution to Congress refusing to ratify the 15th Amendment (prohibiting denial of suffrage on racial grounds).  Ohio ultimately relented, withdrew the resolution, and ratified the Amendment, but only when it was clear that it would become law in any case.  Emotions still ran strong and tensions high in the state whose antebellum “black laws” had rivaled Louisiana’s for their severity, and it is not surprising that a President from this tension-filled state, Rutherford B. Hayes, facilitated the end of federal Reconstruction.  Growing up African American in Ohio required a sense of humor.

Even after publishing two books of poetry before the age of 25, Dunbar still had to work as an elevator operator in order to survive, but during that time of economic depression, any job was a blessing.  And his poetry had captured the attention of the “dean” of American literature, William Dean Howells.  When Howells agreed in 1896 to write the introduction to Dunbar’s Lyrics of Lowly Life, the young poet must have been ecstatic.

But his sense of humor also came in handy.  We’ll look at Howells’s introduction and Dunbar’s response in a moment, because Dunbar’s choices are as funny as they are full of chutzpah. But first, we need to talk a little about the particular climate of the U.S. at that time.  END_OF_DOCUMENT_TOKEN_TO_BE_REPLACED