It’s here.  The event of the century.  The one we’ve all been waiting for with dread.

A selection of humor to help you prepare:

HEMPSTEAD, NY—Saying he would probably introduce the falsehood in his opening statement or perhaps during his response to the night’s first question, Republican nominee Donald Trump reported Monday he was planning to throw out a blatant lie about the level of crime committed by immigrants early in the first presidential debate to gauge how much he’d be allowed to get away with.  More…

With over a hundred million people projected to watch the debate, roughly sixty million of them will be barely sentient after ingesting what they deem to be the necessary dose of intoxicants.  More… 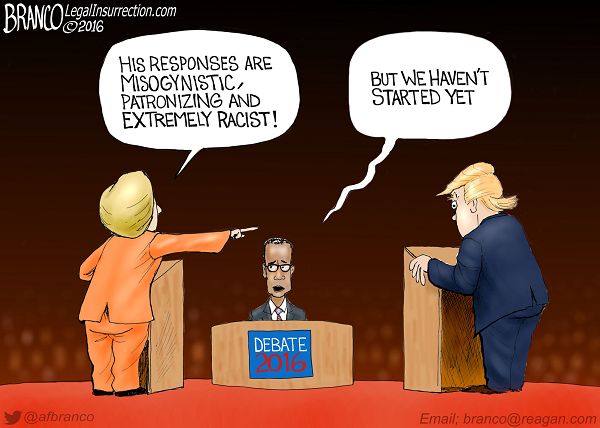 Standing slightly crouched with her fists raised up in front of her in the middle of her campaign office’s mock stage, a blindfolded Hillary Clinton reportedly implored her high-level staffers to attack her with talking points from all sides Wednesday in preparation for next week’s first presidential debate.  More… 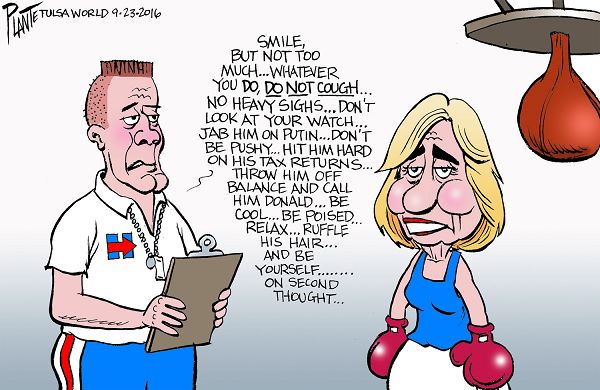 TRUMP WARNS THAT CLINTON WILL RIG DEBATE BY USING FACTS

“You just watch, folks,” Trump told supporters in Toledo, Ohio. “Crooked Hillary is going to slip in little facts all night long, and that’s how she’s going to try to rig the thing.”  More…

Stay safe out there. 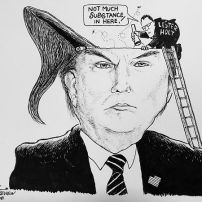 Poll: 89% Of Debate Viewers Tuning In Solely To See Whether Roof Collapses

“Of the 2,000 individuals surveyed, we found that nearly nine in 10 said they would be watching tonight’s debate on the off-chance that they might get to witness the roof of Hofstra University’s Hagedorn Hall suddenly cave in and crush the nominees for president,” said Quinnipiac spokesman Michael Jovan. 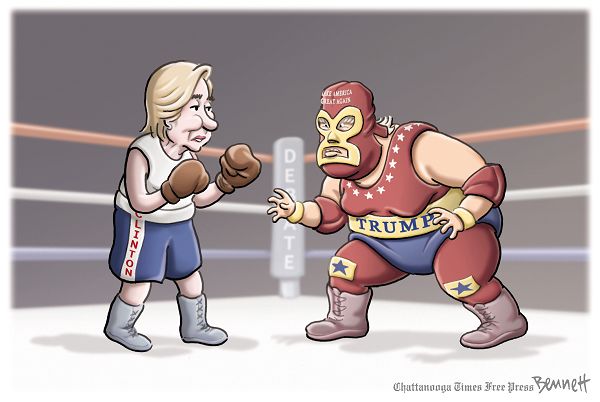 “So, just as a recap: You had numerous options and a full year to decide on the candidates you wanted to be your next president, and these were the two you picked. These two. Right here. All right, now let’s begin.”

END_OF_DOCUMENT_TOKEN_TO_BE_REPLACED

In the Archives: Mark Twain’s “A Presidential Candidate” (1879)

To “celebrate” the Iowa Caucuses, we present Mark Twain’s “A Presidential Candidate.”  In light of the sometimes depressing spectacle of the primary season, it is nice to see Twain’s refreshing candor.  Here it is, from June 1879: 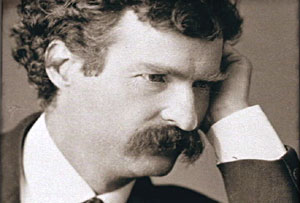 I have pretty much rkde up my mind to run for president. What the country wants is a candidate who cannot be injured by investigation of his past history, so that the enemies of the party will be unable to rake up anything against him that nobody ever heard of before. If you know the worst about a candidate to begin with, every attempt to spring things on him will be checkmated. Now I am going to enter the field with an open record. I am going to own up in advance to all the wickedness I have done, and if any congressional committee is disposed to prowl around my biography in the hope of discovering any dark and deadly deed that I have secreted, why—let it prowl.

In the first place, I admit that I treed a rheumatic grandfather of mine in the winter of 1850. He was old and inexpert in climbing trees, but with the heartless brutality that is characteristic of me, I ran him out of the front door in his nightshirt at the point of a shotgun and caused him to bowl up a maple tree, where he remained all night, while I emptied shot into his legs. I did this because he snored. I will do it again if I ever have another grandfather. I am as inhuman now as I was in 1850. I candidly acknowledge that I ran away at the Battle of Gettysburg. My friends have tried to smooth over this fact by asserting that I did so for the purpose of imitating Washington, who went into the woods at Valley Forge for the purpose of saying his prayers. It was a miserable subterfuge. I struck out in a straight line for the Tropic of Cancer, because I was scared. I wanted my country saved, but I preferred to have somebody else save it. I entertain that preference yet. If the bubble reputation can be obtained only at the cannon’s mouth, I am willing to go there for it, provided the cannon is empty. If it is loaded, my immortal and inflexible purpose is to get over the fence and go home. My invariable practice in war has been to bring out of every fight two-thirds more men than when I went in. This seems to me to be Napoleonic in its grandeur.

My financial views are of the most decided character, but they are not likely, perhaps, to increase my popularity with the advocates of inflation. I do not insist upon the special supremacy of rag money or hard money. The great fundamental principle of my life is to take any kind I can get.

The rumor that I buried a dead aunt under my grapevine was correct. The vine needed fertilizing, my aunt had to be buried, and I dedicated her to this high purpose. Does that unfit me for the presidency? The Constitution of our country does not say so. No other citizen was ever considered unworthy of this office because he enriched his grapevines with his dead relatives. Why should I be selected as the first victim of an absurd prejudice?

I admit also that I am not a friend of the poor man. I regard the poor man, in his present condition, as so much wasted raw material. Cut up and properly canned, he might be made useful to fatten the natives of the cannibal islands and to improve our export trade with that region. I shall recommend legislation upon the subject in my first message. My campaign cry will be, “Desiccate the poor workingman; stuff him into sausages.”

These are about the worst parts of my record. On them I come before the country. If my country don’t want me, I will go back again. But I recommend myself as a safe man—a man who starts from the basis of total depravity and proposes to be fiendish to the last.

Engraving based on an 1879 photograph.

The Summer of Trump: Clown, Gasbag, Monster, Anti-PC Hero, and Other Images of THE DONALD

An update on a new image that emerged: The Fall of Trump: A New Image of the Donald

Like many observers this summer (and heading into fall), I have been fascinated by the rise (and continued buoyancy) of Donald Trump.  And like many, I considered him a joke at first. 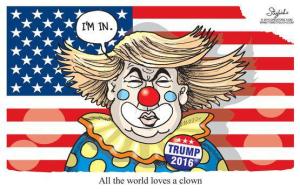 Early in the Trump Era ™, political cartoonists, like late night hosts, were excited to have Trump for fodder.  And what is not to love (for a comedian): the hair, the brashness, the class, the near-constant stream of material… it’s the Donald.  He was a walking punchline before he entered the race. 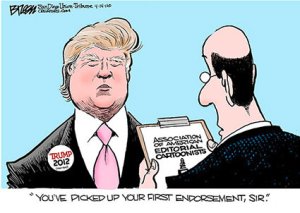 Especially for cartoonists: the hair. Earlier this summer, I was riding in a van in Oakland with Yakov Smirnoff, and he mentioned getting his start at a Trump casino.  Someone said, “you mean our next president.”  To which he replied, “no, he shoots his foot… into in his mouth…shoots himself in the…”  Yakov, as you may know, has built his comedy career out of his encounters with America as a foreigner, including struggles with idiom.  So I helped him out, “you mean, he puts his foot in his mouth, then he shoots it.”  And that is the story of how I mad Yakov Smirnoff laugh

In looking at political cartoons of Trump, it is clear that his image has shifted from that of sideshow clown.  As the summer progressed, the humor of cartoons shifted from a making fun of Trump or mocking his effect on the Republican Party to ridiculing him for his bombastic rhetoric.  To many observers–both left and right–Trump has become less humorous as his supporters have shown more serious support.

Reflecting more general reactions people have had to Trump, political cartoons can be grouped into a few different areas: criticisms of a variety of types, immigration-related images, Spanish-language reactions, Republican party reactions, pro-Trump, and comparisons to Democrats, especially Sanders, but also Clinton and others.  Finally, there are a few, but not many, pro-Trump cartoons, although some of the cartoons focus on the question of “political correctness,” and are only borderline positive.

END_OF_DOCUMENT_TOKEN_TO_BE_REPLACED

Last Saturday the Washington glitterati gathered at the Washington Hilton for what has become a major political event; the White House Correspondent’s Dinner. The draw has over the years become the president doing a stand-up bit followed by a professional comedian roasting more or less everybody in the room. This year’s invited host was Cecily Strong, a Saturday Night Live cast member known for playing The Girl You Wish You Hadn’t Started a Conversation With. Strong, only the second female to host in the last 20 years, did not go soft on those attending, pun intended. In twenty minutes she made sure to joke both left and right. My personal favorite was when she went after Obama: commenting on criticism that Senator Elizabeth Warren is “too idealistic and her proposed policies are too liberal,” she told people to look at President Obama “people thought the same about 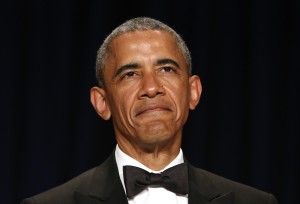 him and he didn’t end up doing any of that stuff.” Obama’s jokes also hit home, especially his jab at Hillary Clinton: “I have one friend, just a few weeks ago she was making millions of dollars a year and she’s now living out of a van in Iowa”. Indeed, the White House Correspondent’s Dinner has become something of a comedic highlight of the year for those interested in politics, giving it the nickname “Nerd Prom”.

The modern classic of the annual dinners is from 2006 when Stephen Colbert appeared as his signature parody of a conservative media pundit and brutally criticized George W. Bush and the media’s failure to confront his administration. Among the zingers was when he tried to reassure Bush not to pay attention to approval ratings; “we know that polls are just a collection of statistics that reflect what people are thinking in reality. And reality has a well-known liberal bias”. Reports after the dinner claimed that Bush was furious over Colbert’s jokes and especially conservative media pundits agreed that Colbert had gone too far. However, seeing the comedian take on the president as close to mano a mano as you can get is something the audience longs for. In medieval times it was said that the only one who could speak the truth without fear of repercussions was the court jester. Today the court jester is often invisible, even if Jon Stewart is still on the air a couple of months, Larry Wilmore has done an excellent job with the former Colbert Report, and cartoonists like Ann Telnaes of the Washington Post is fighting the good fight. At the White House Correspondent’s Dinner the court jester speaking truth to power should be the main attraction.