Humor in the Age of Trump

Having been distracted from the study of humor by the spectacle of politics for the past six months to a year, I have yet to put together a cogent response to the question of the role of humor in the age of Trump.  For many, it seems, there is little to laugh at in such a time–at least not the laughter of pleasure or enjoyment.  The humor that comes with satire, yes, but I have not seen much pro-Trump humor.  Maybe I am not looking in the right place. 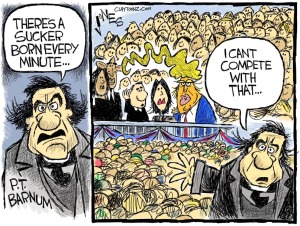 Here I want to gather and direct you to a few pieces that I have found interesting on humor and its role now.  Please feel free to direct us toward others in the comments.

LAUGHTER IN THE AGE OF TRUMP

…Comedy, however spiteful, has always possessed a special power to reveal that the emperor has no clothes. Satire defeats fear with laughter. As Jon Stewart put it in a 2010 MSNBC interview with Rachel Maddow—about the destructive impact of news entertainment on journalistic standards—what “satire does best…is articulate an intangible feeling that people are having, bring it into focus, say you’re not alone. It’s a real feeling. It’s maybe even a positive feeling, a hopeful feeling.”3 Unlike the smug laughter of cynical disavowal, the stinging laughter of pointed satire can actively participate in transforming our perception of reality. Since reality is a construct—equal parts unknown trauma and Celebrity Apprentice—it is therefore ripe for the molding, and ours for the seizing….

“Hold on—that’s a trash fire. Over there is Trump’s Inauguration speech.”

…First of all, America, never forget the immense power of humor to expose misguided values and destructive practices. Satire is as vital and as useful now as it was when Aristophanes ragged on Socrates in The Clouds back in 423 BC. You remember that gut buster, don’t you? Well, we still have plenty to learn from Swift and Johnson, Bierce and Twain, Orwell and Huxley. Satire is not only funny but also enormously forceful and effective—and, human nature being what it is, the comic exposure of vice and folly has the added benefit of offering great job security. America, I know you feel like you’re on the defensive, that even as you try to inspire, persuade, and reform, you secretly fear that you are now a voice crying in the wilderness. The satirist, by contrast, remains on the offensive, challenging established power structures, revealing their absurdity or violence, forcing villains to account for themselves. Orwell was right that “Every joke is a tiny revolution,” because satirical humor is the enemy of established power—especially power that lacks moral leadership. The satirist’s work is the serious business of striking into that troubling gap between what our ideology promises and the often disappointing outcomes our choices actually produce. We don’t call them “punch” lines for nothing….

Diversity Among Comedians and Audiences Makes Room for More Laughs

…What’s notable about these new, louder voices is that they aren’t stifling free speech (that bludgeon so often used by incorrectness defenders). They’re creating more. Comics such as Jim Norton may criticize the internet outrage gang for spending too much time railing about matters that are inconsequential, namely jokes told by comics. Upon closer examination, however, a lot of these “petty” conversations speak to issues of great significance in our society like how we portray and treat historically disenfranchised groups.

Does some of the outrage go too far? Yes. Will fear of backlash lead to some performers self-censoring their material? Perhaps. (Though you’ll note that most of these complainers aren’t exactly being silenced.) But it’s a false presumption that being more mindful when it comes to producing humor that punches down will somehow create comedy that’s less funny. If anything, it makes it smarter….

Comedians in the Age of Trump: Forget Your Stupid Toupee Jokes

But these sorts of jokes about him fail to even begin countering the disastrous impact he’ll have upon the world. Because the problem isn’t that he’s unmockable; it’s that he’s too dangerous to simply mock. The saint of the so-called “alt-right,” the man who “tells it like it is,” supports free speech only so long as he isn’t the butt of it. His rhetoric is grounded in hate. But what’s most dangerous is that his entire identity is grounded in the paranoid idea that he, a millionaire who answers to no one — the very definition of a punch-up comedy target — is somehow the victim, and that making fun of him is in fact punching down. The best comedy imagines new, better worlds by laughing at the old, current one. But how do we laugh at this world when it’s run by a man who not only can’t take a joke but would be giddy at the prospect of taking away our right to make them at all?