In the Archives: The Philosophy of Laughter and Smiling by George Vasey (1875)

Editor’s Note:  This post is the first in a planned series on archival sources on humor.  We will be posting important primary sources that might be of interest to humor studies scholars and general readers.  If you would like to contribute a post or recommend a source, please let me know.

See our other posts in this series:

In the Archives: Fart Proudly by Benjamin Franklin (1781)

In the Archives: The Philosophy of Laughter and Smiling by George Vasey (1875)

A new word for the day: misegolast.  Laughter hater.  As Robert Mankoff notes in the New Yorker, misegolasts can be traced back to the Old Testament.  As John Morreall noted in his book, Humor Works, the long history of those opposed to laughter counts the English poet Shelley as a prominent spokesman.  He stated: “I am convinced there can be no entire regeneration of mankind until laughter is put down.” 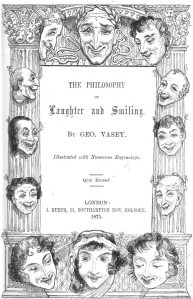 George Vasey’s The Philosophy of Laughter and Smiling, published in London in 1875, is a classic of the anti-laughter genre.  Coming at  time in which humor, especially in the works of the American humorists Artemus Ward and Mark Twain, was exceedingly popular in England, Vasey’s work argued that laughter was both morally and physically dangerous.  Indeed, Vasey argues that laughter is a symptom of modern civilization, one that has been commercialized by humorists who spread a dangerous behavior.

According to the article, “”The pleasure of fiends”: Degenerate Laughter in Stoker’s Dracula,”  by Mackenzie Bartlett, the book was reviewed by at least 19 British periodicals.  And Vasey’s work is not the only argument of the misegolastic variety either at the time, or since.  And while the anti-laughter argument my paradoxically inspire much laughter, or at least certain types of smile (which are better than laughter, according to this argument), shouldn’t we take serious the argument that the meanings of laughter might have changed historically and might, in some cases, be harmful.  One place to start might be Anca Parvulescu’s Laughter: Notes on a Passion (Short Circuits).

You can download the entire PDF of Vasey’s book here.  Enjoy such chapters as “Further observations on the means employed to produce what is termed laughter in infants, and on the injurious effects which result therefrom…”; “On the moral and intellectual characteristics of those who are addicted to laughing…”; “Are laughter and joking, badinage and fun, consistent with dignity of character? or are they conducive to the maintenance of a beneficial political or social influence?”; “On the injurious effects of nursery rhymes and juvenile literature in stultifying the minds of children and youths by furnishing them with extravagant lies and egregious nonsense to excite their wonder and induce them to laugh” (a must read for all the parents out there); and, in an appendix on tickling, a section of special interest to me, as a ticklish person, “On the extremely horrible and agonising condition to which a human being can be reduced by systematic tickling.”

SEE BELOW FOR ILLUSTRATIONS OF LAUGHTER FROM THE BOOK,

including the full size picture of this fine fellow:

Here is a sample from the first chapter: “First–On the pecuniary expense of laughter. Second–On those who are enriched by it. Third–On its imagined advantages and benefits.”

1. It is assuredly a great fact, which cannot be gainsayed, that an immense majority of the inhabitants of most civilised countries hold the habit of laughing in such high estimation, and feel such a craving for the exercise of it, that collectively they expend vast sums of money in procuring the stimulus necessary to produce its action.

2. This golden harvest finds its way into the pockets of those highly-gifted individuals who have acquired the happy knack of writing, or mouthing and spouting, those facetious words, or of performing those grotesque actions, which have the magical power of contracting our cheeks into wrinkles, and distending our jugular veins.

3. All our comic and farcical writers, from Wycherly, Farquhar, Smollett, and the like, down to Punch, Fun, and Figaro, have realised princely incomes by their successful efforts in stimulating the pectoral muscles and shaking the diaphragms of their numerous readers.

4. All our clowns and buffoons and comic singers have found out a most effectual method of “raising the wind” simply by ” raising a laugh.”

5. The inhabitants of London alone spend many thousands of pounds annually to support in ease and elegance those dexterous and ingenious eccentrics whose only business it is to make their auditors or spectators laugh.

6. In former times to keep one fool to provoke laughter was considered so choice a luxury as only to be indulged in by a king. At the present time the common people can afford to keep some hundreds.

7. Whereas formerly it was regarded as a rare luxury, it is now looked upon as an absolute necessary of life. Witness the multiplicity of our hebdominal facetiae; witness our Alhambras, our Oxfords, and a thousand other similar rendezvous of inferior notoriety, the managers of which are eagerly striving to rival and eclipse each other in their efforts to screw the nerves of their audiences up to the laughing pitch.

8. He who excites the greatest amount of laughter in a given time, either by his pen, his pencil, his toungue, or his grimaces and buffoonery, is considered the reigning favourite pro tem. ; he is greeted with the loudest plaudits, and, what is of still more importance to him, he receives the greatest pecuniary reward.

9. Indeed, laughter is generally though to be so natural, so convivial, so exhilarating, nay even so healthy, that the monitorial proverb of “laugh and grow fat” has become as “familiar in our mouths as household words.”

And from the book:

A Series of Engravings

EXHIBITING A FEW SPECIMENS OF

THE DISTORTIONS WHICH LAUGHTER PRODUCES ON 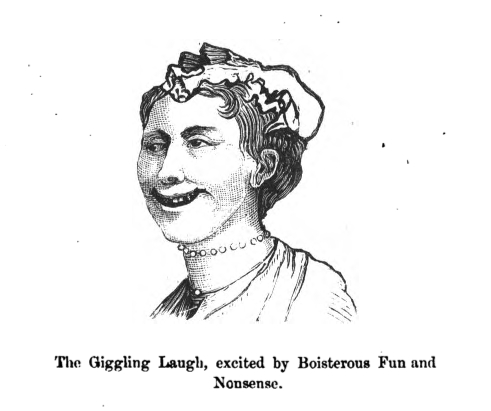 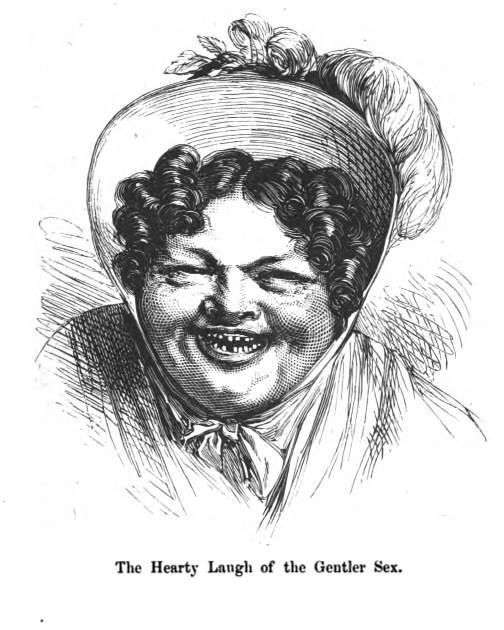