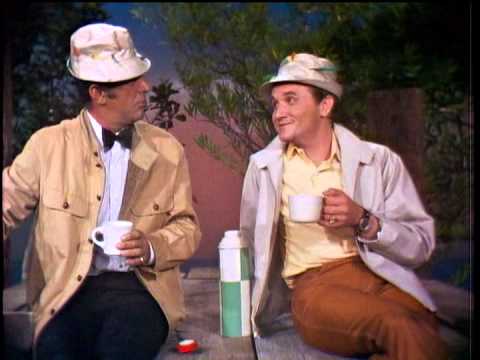 Dean Martin and Roger Miller may seem an unlikely pair at first, but the two entertainers were quite similar in many ways. They both possessed an inviting, conversational vocal style, a sharp, playful wit, a natural ability at improvisation and an endless supply of humor and charm.

Roger Miller was a country music superstar who achieved cross-over commercial success with infectious masterpieces like “King of the Road” and “Dang Me.” Martin was a pop and film icon who had a sincere affection for country music and recorded several country albums, beginning with 1963’s Country Style. Dino even covered a few Roger Miller songs.

Here’s a clip of these two flip sides of the same coin in a sketch from The Dean Martin Show about fishing, drinking and a “Dang Me” duet. And just as Dean Martin could wrap himself around a heartfelt ballad with the best of the crooners, so too did Roger Miller have a gift for poignant ballads. The clip closes with Miller singing his masterful “Husbands and Wives” at Dino’s request.

Roger Miller made four appearances on The Dean Martin Show between 1966-68. Here they meet up in Season 1 for some humorous wordplay. Miller calls out for a number, Martin answers with 21, and the two begin to seemingly write a song on the spot. (Of course the song, “Got 2 Again,” had already been written and recorded by Miller – the record begins by Miller calling out for “a number between 20 and 22” – released as the B-side to “Dang Me.” But why spoil the fun?)