These giggling words are among the last uttered by Fortunato, the rather unfortunate victim of a deadly practical joke in Edgar Allan Poe’s memorable tale, “The Cask of Amontillado.” In that short story, the narrator Montresor directly discloses neither the “thousand injuries” he’d received from Fortunato nor the final “insult” that led him to vow revenge, but he does present his plan as the solution to a puzzle: “I must punish, but punish with impunity. A wrong is unredressed when retribution overtakes its redresser. It is equally unredressed when the avenger fails to make himself felt as such to him who has done the wrong.” In other words, Montresor must take his revenge upon Fortunato in such a way that the victim knows all, while the perpetrator is in no danger of being caught. Montresor’s elaborate charade with the wine, the catacombs, the trowel, and the stones reveals his ingenious solution. As is well known, Poe himself took great pride in his analytical, puzzle-solving abilities, and Montresor’s plot reveals a certain gift for ratiocination that Poe valued. At the final moment, after Fortunato has been almost completely immured, Montresor calls his name. “There came forth in return only a jingling of the bells.” And thus is buried another “jingle man.” 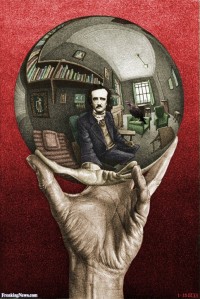 In this series of posts, “Joker Poe,” I have argued that Poe is best viewed as a literary prankster, a practical joker who employed his prodigious intellect, his acute awareness of the marketplace, and his gifts for writing to satirize the culture and society of his era. In a sense, his own readers are suckered in by his tales, poems, and criticism, while Poe himself is likely having a chuckle at their expense. Poe was the great theorist of “Diddling,” which he considered as one of the exact sciences, and he insisted that no diddle—a swindle, confidence-game, or prank—is complete without a “grin,” but only one that the diddler himself wears, seen by no one else. Poe’s propensity for diddling extended to his literary career, which can be seen not only in those works which are clearly hoaxes, but also in his poetry, his tales, and his criticism. Not surprisingly, Poe made enemies, some of whom have not been so sanguine in accepting the thousand injuries and uncounted insults visited upon them by the grinning diddler.

After Rufus Griswold, whose calumnious portrait of Poe in an obituary caused outrage but likely led to Poe’s eventual enshrinement in a popular-cultural canon, perhaps the most famous of the fabled detractors of Poe during his lifetime was also America’s leading public intellectual, Ralph Waldo Emerson. The phrase “jingle man” is well known in American literary studies, not to mention infamous in Poe Studies, as Emerson’s dismissive appraisal of Poe. That the Sage of Concord might dislike Poe is not surprising, since Poe was probably as ardent an opponent of Emersonian transcendentalism as anyone other than Herman Melville, and Poe’s invectives were especially caustic when it came to the Boston literati, many of whom appeared to be well-nigh slavishly devoted to Emerson’s thought. Poe also criticized Emerson himself as belonging to “class of gentlemen with whom we have no patience whatever—the mystics for mysticism’s sake.” In a follow-up to Poe’s eccentric little series on “Autography,” in which he proposed to analyze the handwriting of famous authors, Poe humorously suggested that “[t]he best answer to his twaddle is cui bono? […] to whom is it a benefit? If not to Mr. Emerson individually, then surely to no man living.”

Hence, for Emerson to dismiss Poe as a “jingle-man” might be chalked up to “turnabout is fair play,” were it not for the circumstance in which the insulted was coined. From a certain perspective, and certainly from that of the original source of this quotation, Emerson’s evaluation of Poe can be seen less as a critique of Poe’s work than as evidence of Emerson’s own poor judgement. As I point out in my book, Poe and the Subversion of American Literature: Satire, Fantasy, Critique (2014), Emerson’s famous, if off-handed critique is reported only second-hand by William Dean Howells in his Literary Friends and Acquaintance, in which Howells recalls a conversation with Emerson on the subject of Hawthorne, whose final novel, The Marble Faun, Emerson called “a mere mush.” Apparently indignant, Howells asserts that “this great man was no better equipped to judge an artistic fiction than the groundlings who were then crying out upon the indefinite close of The Marble Faun.” Howells goes on to say that “Emerson had, in fact, a defective sense as to specific pieces of literature,” explaining that “he praised extravagantly, and in the wrong place, especially among the new things, and he failed to see the worth of much that was fine and precious beside the line of his fancy.” The “jingle man” line follows from Howells’s admission that he only knew the work of William Ellery Channing through Poe’s critical reviews of the poet, and at first Emerson seems to feign ignorance of the author of “The Raven.” “‘Oh,’ he cried out, after a moment, as if he had returned from a far search for my meaning, ‘you mean the jingle-man!’”

For Howells, Emerson’s “jingle man” comment was less an affront to Poe than an insult aimed at Howells himself, and he feels slighted by the remark. “I do not think I could have been more abashed,” writes Howells. “Perhaps I felt an edge of reproof, of admonition, in a characterization of Poe which the world will hardly agree with.” Coming directly on the heels of Howells’s critique of Emerson’s own inadequacies as a literary critic, the “jingle man” assessment cannot really be taken as a credible evaluation of a famous author, but only as an unkind remark directed toward an aspiring one. In other words, one of the most famous dismissals of Poe’s literary value comes from a writer who had “a defective sense” when it came to literature and who was perfectly willing to belittle persons whose aesthetic sensibilities differed from his own. Emerson, not unlike T. S. Eliot, Harold Bloom, and others who seem to be appalled by Poe’s enduring popularity, attacks Poe primarily in order to denigrate the literary or critical judgements of Poe’s admirers. Injuries and insults!

Of course, Poe needs no defense from me or anyone else. Not only does Poe maintain a worldwide popularity greater than any other U.S.-born writer, but his place in academic literary studies of American and world literature is as secure as may be imagined. Indeed, as I have suggested in this series and elsewhere, Poe’s legend may have become so grand as to burden the historical study of his life and times, which is part of why—in my view—his antic prankishness is so overshadowed by an image of the author as the embodiment of Gothic gloom, mystery, madness, and terror. Like Fortunato, who appears as a fool attired in the jester’s motley, the jovial, laughing Poe has been prematurely buried. But the “Joker Poe,” whose portrait I have limned all too sketchily in this series, is worthy of respect and admiration as a major humorist, and we should not become so enamored with “supernal beauty” or “horror as the soul of the plot” that we forget to laugh. “Ha! ha! ha! — he! he! he! — hi! hi! hi! — ho! ho! ho! — hu! hu! hu! — oh, that’s good! — oh, that’s capital — such a wit!”

Poe is ultimately much more of a Montresor than a Fortunato. As I’ve been saying throughout this series on Poe’s writings, the joke is almost certainly on us, the readers, and Poe’s own laughter is like the diddler’s grin, something he enjoys on his own, while we are safely out of sight. In “The Cask of Amontillado,” after Montresor fails to get a response to his repeated calls he thrusts the torch through the aperture of his nearly completed wall. Hearing only the “jingling of the bells,” he tells the reader that his “heart grew sick,” yet before we can even begin to think that a guilty conscience has overtaken the cool, calculating avenger, Montresor explains that it is merely “on account of the dampness of the catacombs.” Montresor swiftly finishes the job, then informs the reader that fifty years have already passed! Far from feeling remorse, our narrator is gloating over how brilliantly his revenge, with its clever solution to the aforementioned puzzle, has been accomplished. But Montresor’s parting shot—a somewhat snarky “In pace requiescat!”—does not really suit the Joker Poe, since his readers are not likely to rest easy in their assigned tombs. Rather, what this devious, crafty, and jocular Poe incites is a restless disquietude, an uncertain sense of menace, and a sneaking suspicion that we’ve been had. But such is the master diddler’s skill that, rather than feeling aggrieved by his trickery, we might long to reread and to enjoy anew these literary diddles, whether in the form of outright hoaxes or of poems, tales, reviews, essays, and letters. Poe’s writing is no less enjoyable for also being humorous. After all, if terror is of the soul, then laughter must be as well.

This concludes my five-part “Joker Poe” series. If you missed any of the prior entries, or if you would like to read again them in order, please click on the links below:

Robert T. Tally Jr. is an associate professor of English at Texas State University. His books include Fredric Jameson: The Project of Dialectical Criticism; Poe and the Subversion of American Literature; Spatiality (The New Critical Idiom); Utopia in the Age of Globalization; Kurt Vonnegut and the American Novel; Melville, Mapping and Globalization; and, as editor, Geocritical Explorations; Kurt Vonnegut: Critical Insights; Literary Cartographies; and The Geocritical Legacies of Edward W. Said (forthcoming). Tally is also the general editor of Geocriticism and Spatial Literary Studies, a Palgrave Macmillan book series.