Stephen Colbert, in the inaugural episode of the Colbert Report (October 17, 2005), coined the word truthiness to capture the underlying absurdity of the human preference to assert a truth that arises from a devout belief in one’s gut rather than one supported by facts (see:Colbert Introduces Truthiness). Truthiness reflects the desire of a formidable section of the population (or is it the entire population?) to assert that what they believe to be true is true, not necessarily because the facts support it but because they want to believe it so strongly. Colbert, in character, asserted that the nation was at war between “those who think with their heads and those who know with their hearts.” As Colbert put it in an interview with the A.V. Club by The Onion (January 26, 2006), “facts matter not at all. Perception is everything” (see: Colbert Interview).

To say that the word took off is a lame understatement. A Google search of “truthiness” yields 969,000 hits. Wikipedia–where I get all of my facts with full enjoyment of the ironic potential of that statement–has an article on the word that offers 57 footnotes pointing to a wide range of popular culture and media sources. If you are so inclined, you could follow #truthiness on Twitter and receive a constant string of observations from some of the brightest minds of the time, but I can’t recommend that in good conscience.

In no uncertain terms, truthiness is in the American grain, politically and socially. Colbert claims that the word–and its satirical context–is the thesis for the Colbert Report itself. Whether all of his viewers really get that could be debated, at least if one considers viewers early in the run of the show. See the 2009 article examining the complicated range of audience responses to the Colbert Report by Heather LeMarre here: The Irony of Satire.  I have commented on that conundrum in an earlier post questioning the power of satire — Teaching the Irony of Satire (Ironically). That essay was followed by a first-rate essay by Sharon McCoy reaffirming at least some of my optimism — (Embracing the Ambiguity and Irony of Satire).  By 2013, however, Colbert has appeared out-of-character enough and has built such a clear following, it would be much more difficult to find an audience who would be as confused regarding his true political thinking as some viewers were in 2005. He is too big, and he has appeared more often out-of-character via interviews in a variety of outlets. He is liberal, OK?

I would argue that no humorist has ever called into service a word with more usefulness to cultural and media critics, and to lovers of irony. But the concept behind truthiness is not Colbert’s. It’s the cornerstone of American humor, and our greatest writers and characters have built a tradition of humor forever exploiting the grand American attraction to self-delusion, to the power of desire over the power of facts. It is what makes us so funny.

Washington Irving gave us our first enduring humorous character through the sleepy ne’er-do-well Rip Van Winkle, a man who abandons his family for twenty years and returns after his wife’s death to become a grand old man of the town, living the life he always wanted–talking and drinking with friends. Irving brings Rip to readers through his narrator, “Geoffrey Crayon” who takes the story from “Deidrich Knickerbocker,” who takes the story verbatim from Rip himself. That’s a lot of room for creative use of truthiness. Rip is no match for the idealized romantic heroic male of the revolutionary era, the Daniel Boone’s who built it, so to speak. He presents a different kind of American. He does not fight for love of country or for political freedom; he sits out the war. He does not build a homestead thus failing to accept his role in the making of the national Jeffersonian dream. Nope. Within the story are all the facts to show that Rip is a sorry excuse for a man and a lousy American, a troubling subversive. But we love him because he seems like such a nice guy, and his wife is such a pain–as Rip tells it. Of course, his narrative is self-serving–and successful. Although some townspeople clearly know he is a liar, most accept his story of sleeping for twenty years–because it feels right, or at least it allows them to go about their business. They are willing to believe in the mysteries of the hidden corners of the Catskills, but more importantly, they are eager to believe in a man they like. It just feels right. And easier.

Readers, moreover, do the same. They like him; they hate Dame Van Winkle. They forgive Rip his indiscretions and welcome him back into the fold. They believe him because he seems so earnest. Rip abides, bless his heart.  They believe, for the similar reasons, in the exploits of Daniel Boone. But I digress. All of Rip’s late-life success in becoming a center of attention is made possible by his willingness to lie and the inherent desire of most of the townspeople to believe his story simply because they want to. Facts and deductive reasoning be damned. That is funny.

Washington Irving, in giving us Rip, deserves recognition as the first worthy exploiter of truthiness in American humor. The great master of the 19th century was, of course, Mark Twain–who I will come back to in another post. There are many others, from the eternal optimism of Charlie Chaplin, to the befuddled female misfits of Dorothy Parker, to the secret dreams of Walter Mitty envisioned by James Thurber, to the disturbed struggles of Lenny Bruce, to the white Russians of the Dude from the Coen brothers’ The Big Lebowski. It is a long list that has as its current master-artist Stephen Colbert. It is a timeline of writers, characters, comedians, and satirists covering just under two hundred years (using the 1819 publication of “Rip Van Winkle” as my starting point).

For some reason, there is still a need for satirical minds to tell subversive stories and to exploit the absurdities of American culture because there also remains a powerful urge for many Americans to shun facts and go with their gut to serve their own desires and belief systems. They find regular affirmation in popular culture and politics. One could be somewhat disappointed that after all this time there is still so much work to be done to defeat the powers of truthiness in our political systems and social structures. Not me. I believe things will get better. I can feel it in my gut. 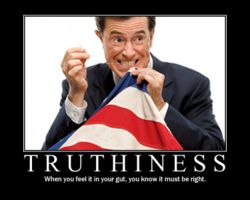 In the Archives: Washington Irving, “The Art of Book-Making” (1819)

Having recently emerged from a long-winter’s haze (which, here in Texas, involves lounging around in seventy-degree weather), I am now ready to resume the full duties of editor of this humor publication.  Granted, I never really left per se, but I have been absent to a degree, owing to various events both personal and professional, both grand and tragic.  Never mind the details.

One detail: I sent my book off to the publisher.  And while the satisfying thud of a 400-page manuscript in a mailbox would have been nice, the click of the mouse and the electronic thud of the manuscript landing in the publisher’s inbox was rewarding, if a bit anti-climactic.  Now that I have written the definitive tome on the reputation of Mark Twain as a humorist (1865-1882)–or at least a tome that hopefully will come out sometime in 2014–I can resume my full duties as editor of this fine publication, which I had already been doing, but in something of a distracted manner.

So, I apologize for the lack of a post this past Monday.  April Fool’s Day would either require a hoax post or something equally worthwhile of the day.  I thought of writing about the imminent closure of this site but did not get around to it.  See above re: book being due. 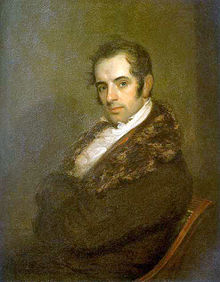 So, for today, April 3, we have a selection from Washington Irving, born on this day in 1783.  The piece is from his Sketch Book of Geoffrey Crayon, published serially in 1819 and 1820.  The subject is fittingly the making of books, the natural predatory nature (and flatulence) of the author, and the inappropriateness of napping and/or laughing in the archive. Here is “The Art of Book-Making”:

If that severe doom of Synesius be true,–“It is a greater offence to steal dead men’s labor, than their clothes,”–what shall become of most writers?

I HAVE often wondered at the extreme fecundity of the press, and how it comes to pass that so many heads, on which Nature seems to have inflicted the curse of barrenness, should teem with voluminous productions. As a man travels on, however, in the journey of life, his objects of wonder daily diminish, and he is continually finding out some very simple cause for some great matter of marvel. Thus have I chanced, in my peregrinations about this great metropolis, to blunder upon a scene which unfolded to me some of the mysteries of the book-making craft, and at once put an end to my astonishment.

I was one summer’s day loitering through the great saloons of the British Museum, with that listlessness with which one is apt to saunter about a museum in warm weather; sometimes lolling over the glass cases of minerals, sometimes studying the hieroglyphics on an Egyptian mummy, and some times trying, with nearly equal success, to comprehend the allegorical paintings on the lofty ceilings. Whilst I was gazing about in this idle way, my attention was attracted to a distant door, at the end of a suite of apartments. It was closed, but every now and then it would open, and some strange-favored being, generally clothed in black, would steal forth, and glide through the rooms, without noticing any of the surrounding objects. There was an air of mystery about this that piqued my languid curiosity, and I determined to attempt the passage of that strait, and to explore the unknown regions beyond. The door yielded to my hand, with all that facility with which the portals of enchanted castles yield to the adventurous knight-errant. I found myself in a spacious chamber, surrounded with great cases of venerable books. Above the cases, and just under the cornice, were arranged a great number of black-looking portraits of ancient authors. About the room were placed long tables, with stands for reading and writing, at which sat many pale, studious personages, poring intently over dusty volumes, rummaging among mouldy manuscripts, and taking copious notes of their contents. A hushed stillness reigned through this mysterious apartment, excepting that you might hear the racing of pens over sheets of paper, and occasionally the deep sigh of one of these sages, as he shifted his position to turn over the page of an old folio; doubtless arising from that hollowness and flatulency incident to learned research.