All Joking Aside: An Interview with Rebecca Krefting on her new book (with an excerpt) 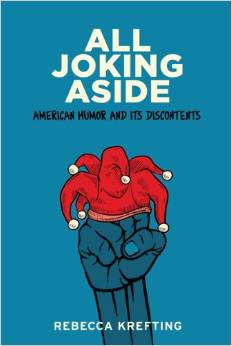 I have been excited for Rebecca Krefting’s All Joking Aside (out now through Johns Hopkins University Press) to come out since hearing her present at the 2010 AHSA/MTC conference in San Diego (this year in New Orleans).  Krefting’s approach to stand-up comedy is thoughtful, nuanced, and entertaining.  In the book, Krefting uses the concept of “charged humor” to describe a particular type of stand-up performer, providing both a useful rubric for understanding certain types of stand-up and solid case studies of performers.  You can read a section on the concept of charged humor here. From All Joking Aside: American Humor and Its Discontents, by Rebecca Krefting. Published by Johns Hopkins University Press.  Reprinted by permission of the publisher.

I recently interviewed the Krefting about the book and her experiences as a humor scholar:

Tracy Wuster) Tell me about your start in humor studies.  How and when did you begin pursuing it as a subject? who has influenced you as a scholar of humor?

Rebecca Krefting: I think I began studying comedy the moment I began writing my first set. I contemplated questions like: what words would create the greatest comedic effect and in what order? How do you take everyday occurrences or a terrible situation and make it funny? Why is something funnier coming out of his mouth than out of mine? I started performing stand-up comedy and improv in August of 2001, a mere six weeks before 9/11. I was fresh out of college and while considering graduate school, had not made any commitments either way. I worked several jobs: bartender/server, legal secretary, and domestic worker and had just enough time and chutzpah to try my hand at comic performance. I strove to be a comic and attacked it with the fervor of a beaver building a dam—like my life depended on it (if you know anything about beavers, you know that’s true). The improv acting I fell into by auditioning on a lark for a professional troupe called The Skeleton Crew performing out of Nashville, TN. Looking back, I know now just how lucky I was to train in this comedic cultural form, which informed my stand-up and later my teaching. In both stand-up and improv, I was acutely aware of my identity as a woman while performing (this more so than my being a lesbian because although I was out, I opted not to call attention to this during my stand-up) and so I became a critical observer of how identities played out on stage. Thus began my fascination with the practice, history, and analysis of comedy. When I started applying for grad schools, I knew that an MA in Women’s Studies would expose me to the scholarship that would help me make sense of the gender gap in comedy and other cultural phenomena I had been observing in the comedy world. Having been schooled in one identity-based discipline, it seemed a natural shift to obtain a doctorate in American Studies, the first identity-based discipline in academia. It didn’t hurt that the Department of American Studies at the University of Maryland, College Park also housed (at that time) the Art Gliner Center for Humor Studies, where I was offered employment.