In case you missed it—and you probably did unless you are an English nerd like me—National Grammar Day was March 4th. It came to my attention a few years ago, perhaps because I was teaching an Advanced Grammar class (as I am also doing this year). The “holiday” began in 2008, so it is relatively short on tradition. Martha Brockenborough started the tradition rolling because she felt deeply about proper grammar—this prompted her to start the Society for the Promotion of Good Grammar (SPROGG) and institute National Grammar Day as March 4 (March forth—an imperative). The society has its own website, though posts to it seem few and far between.

As an English nerd, I have tried to take this day and society seriously; however, a quick look at the established website and its posts make that extremely difficult. Most of the posts demonstrate the ways in which “poor” grammar can create unintended humor. See for yourself: 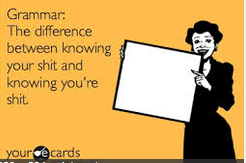 Instead of the proper respect and seriousness, what National Grammar Day did prompt was some semi-serious thought concerning the nature of insider humor and what work such humor actually performs. Grammar jokes belong to one of a great many “niche” jokes—that is, they require that a listener or reader know something about the subject matter in order to appreciate the humor. Mathematics jokes fall into this category of insider humor, as do jokes from other disciplines such as chemistry, engineering, and physics.

Some jokes are universal.  Example: Passing gas in almost any situation outside a bathroom—and only private bathrooms at that—seems to provoke universal laughter. These and other slapstick jokes usually do not require insider knowledge in order to tickle the funny bone.   Grammar jokes proliferate on the Internet and have always been present as texts even before the Information Superhighway. They are simply easier to access now.   Not all of these require as much insider knowledge as some other disciplines because native speakers of English can recognize anomalous errors of Standard English that form the joke. Thus the insider group is relatively large: anyone who has English language proficiency. Yet for the student/scholar of English, the jokes have a richer meaning. For example:

The cartoonist uses the rule for first person pronouns in subject position to make fun of the strict grammarian in everyday conversation. Grammatical error aside, we laugh over two people coming to blows over the proper use of a pronoun even though both speaker and listener understand exactly what is meant. The following cartoonist similarly creates a joke; this time concerning the fact that here in America, we have a National Day for just about everything.

A few of these grammar jokes do, however, require some knowledge of the rules. Pronouns seem to offer the greatest number of one-liners. The following requires, for example, that the reader remembers what constitutes a split infinitive and how to diagram a sentence—or at least what such a diagram is:

This example plays upon the stereotype of nerdy student (or teacher?) while at the same time asking readers if they want to split infinitives—an actual grammatical error—or diagram a sentence—something completely “legal” and helpful if the reader wanted to see how the sentence actually worked.

Humor across other disciplines is even less clear-cut, and depends for its appreciation a disciplinary knowledge that the layman may not have. Witness this chemistry joke available on the web, one that requires some chemistry background to understand the joke: 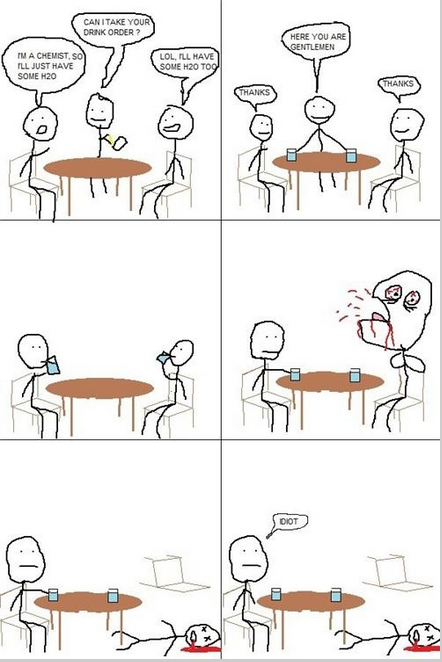 Without knowledge of the chemical formulae for water and hydrogen peroxide, a reader might be stumped by the humor of this one. The same is true for other small disciplinary communities. Here is one from the physics humor website: 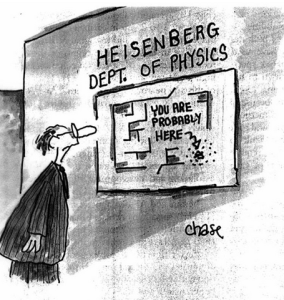 Intimate knowledge of the Heisenberg Uncertainty Principle is necessary for the laugh. Without it, a reader cannot interpret the “probably here” that is the nub of the joke.

Mathematicians and engineers also design jokes from the principles of their disciplines. Here’s one that only requires basic math: 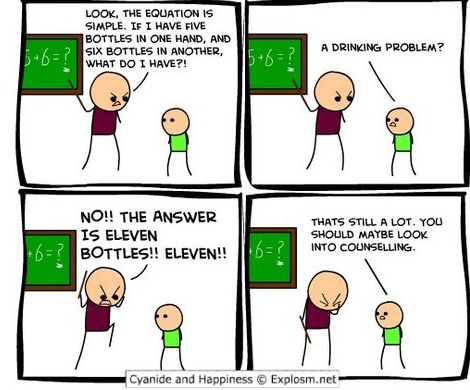 Other disciplinary jokes, like this one from engineering, play upon stereotypes about the personalities of people who choose a field like engineering. They may cause a laugh from others, but engineers themselves find them particularly funny.

So, what generalizations can we make about the “insider” joke? In general, these tend to be linguistic in nature, even when visual images are present. The H2O/H2O2 chemistry joke falls into this category, as does the grammar joke concerning split infinitives. To find any of these funny, a reader needs to have at least a few disciplinary terms from the discipline in his/her personal lexicon. However, even simply knowing the terminology as an “outsider” does not guarantee that an outside reader will find the joke funny. In addition to that knowledge, an outsider would still in many cases need to understand exactly how the chemist, physicist, engineer, or grammar maven use such terms and how the discipline itself makes use of such terms. Others require knowledge of the “typical” (stereotypical) member of each discipline is viewed in the wider world. The Dilbert joke above plays upon stereotypes outsiders have for engineering technicians. The “split infinitive” grammar joke likewise uses in its image the picture of a “typical” English teacher (the clothing and eyeglasses).

Disciplinary humor seems to have replaced earlier stereotyped humor originally reserved for women (the dumb blonde) or immigrants (Polish, Jewish, Irish) or religion (Catholics, Jews) from the mid-twentieth century that are now considered politically incorrect. It is interesting that though I still hear the occasional dumb blonde joke, the immigrant jokes seem to be told less often now. Perhaps women are not vigilant enough in combatting this image, but more likely these jokes were always told almost exclusively by men to men, and thus I, as a woman, would not hear them while others do.

So, why do disciplines not complain about their image? And why are members of the discipline in question the most appreciative of jokes that are essentially about themselves? First and foremost, I have no doubt that there are grammarians, engineers, chemists, physicists—that is, members of every discipline, who do not appreciate jokes about themselves. The human sense of humor is idiosyncratic at best. But the very fact that these jokes require knowledge of the field often create a sense of community and belonging that allow members to laugh at and about themselves.   They create a shared body of knowledge and a recognition of the personality-types that one sees every day on the job or in the academic department. They allow insiders to revel in their insider position against the outside world. For those who feel their discipline is under-appreciated, it creates a sense that workers in a particular discipline at least understand and appreciate each other.

Clearly there was not enough room for me to post jokes from every disciplinary field. Have I missed yours? If so, please share a joke from your own field here. Why do people in that area find them funny?