The Morphology of a Humorous Phrase: “We have met the enemy and he is us”

I was reminded of a chain of events in the development of a humorous phrase when I saw a rather poignant cartoon by Jim Morin last month.  It got me to thinking about how these phrases get started and how they change over time.  There is a book called Nice Guys Finish Seventh by Ralph Keyes that goes into the process more deeply, but this is my experience with one phrase.

Walt Kelly’s phrase, “We have met the enemy and he is us” derives from braggadocio during the War of 1812 in which commodore Oliver Hazard Perry reported, “We have met the enemy and they are ours” to William Henry Harrison after the Battle of Lake Erie.  That phrase stands with John Paul Jones’s “I have not yet begun to fight,” and Julius Caesar’s “Veni, vidi, vici” (I came, I saw, I conquered) as one of the most famous battle reports in history.

Walt Kelly did not originate “We have met the enemy and he is us” in a cartoon strip.  It was first used on a poster to promote Earth Day in 1970.  Later, the artist put Porkypine and Pogo into a strip and attributed the phrase to Pogo as seen below. 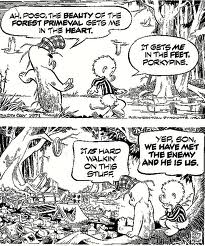 Because it is a pun on a very familiar quote, this phrase caught the collective imagination of Americans.  It is still used in public discourse to describe, for instance, the potential results of man-made global warming.  And cartoonist Jim Morin paraphrased it in a poignant drawing following the murders of servicemen at Ft. Hood in April of 2014.

The phrase lives on, not by constant reuse in similar circumstances, but by clever rephrasing in divergent situations.  That is what has kept this phrase from becoming a cliché.  As it is artfully applied to different scenarios, it continues to tell us about ourselves—and the world around us.