How Tom Sawyer Grew Up to be Hank Morgan

Tom Sawyer and Huck Finn are probably the most well known of Mark Twain’s characters. Bronze statues of the boys grace Schoolyard Hill in Hannibal.  Their images have been used for everything from selling paint to Norman Rockwell pictures that evoke the nostalgia of childhood. Each boy is the subject of his own novel, and although Adventures of Huckleberry Finn has stood the test of time better than Tom’s adventures, the character of Tom remains that of a charming if mischievous boy. While Huck is practical, and can improvise a workable solution to any problem, Tom’s forte is the grand effect—the spectacle. He has read all of the romance novels, and his dreams as a boy are populated by robbers, pirates, and steamboat captains who perform feats of derring-do, rescue, capture and ransom ladies and gentlemen, and ambuscade Arabs, carrying of piles off booty. 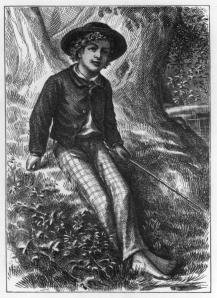 The Adventures of Tom Sawyer ends with this “Conclusion”:

So endeth this chronicle. It being strictly the history of a boy, it must stop here; it could not go further without becoming the history of a man…Some day it may seem worth while to take up the story of the younger ones again and see what sort of men and women they turned out to be; therefore it will be wisest not to reveal any of that part of their lives at present. (TS 215)

Twain takes up the story of the boys yet again in Adventures of Huckleberry Finn. Tom’s part in this later novel is, of course, much smaller, as this is Huck’s story. Twain uses Tom to tie this second novel to the first, where Tom makes good on his plan to instigate Tom Sawyer’s Gang, and initiates the members with blood oaths. His imagination turns a Sunday School picnic into a caravan of Arabs, whom the gang intend to rout and rob. Tom then disappears from the narrative except for moments of decision in Huck’s adventures when he invokes Tom as his “authority” on how to do things with “style.” After setting up the elaborate ruse that fakes his death, Huck says: “I wished Tom Sawyer was there. I knowed he’d take an interest in this kind of business, and throw in the fancy touches. Nobody could spread himself like Tom Sawyer in such a thing as that” (HF 657). Huck’s appreciation of Tom’s “fancy touches” occurs in other parts of the novel as well, but Tom’s return in the Evasion chapters demonstrates a shift in Twain’s indulgent, “boys will be boys” attitude concerning Tom.

Those chapters show a Tom who creates an elaborate and dangerous (to Jim) plan for freeing the runaway slave from his imprisonment at Phelps’ farm. Huck’s plan is simple, straightforward, and to the point: “Here’s the ticket. This hole’s [window] big enough for Jim to get through if we wrench off the board” (HF 854). Tom’s reply offers the reader a glimpse of his romantic notions of escape from captivity: “It’s as simple as tit-tat-toe, three–in-a-row, and as easy as playing hooky. I should hope we can find a way that’s more complicated than that, Huck Finn” (657). Huck just “knows” that Tom’s plan will be “worth fifteen of mine for style” and “would make Jim just as free a man as mine would, and maybe get us all killed besides. So I was satisfied…” (HF 853). The difference between the two boys is clear—Tom is all style, and Huck substance. While Tom’s escape plan works out in the end, Tom is shot and Jim very nearly hung.

As most scholars have noted, Twain found particularly interesting material for his art in the matter of Hannibal. His later attempts to return to the adventures of his two most famous characters, however, bore little fruit. Tom Sawyer, Detective’s sales never quite met the popularity of Tom Sawyer or Huck Finn, and Tom and Huck Among the Indians remained unfinished at his death. Others have borrowed the characters from both novels for film versions, and screenwriter James Robinson resurrected Tom Sawyer as a young man to be Alan Quartermain’s protégé in The League of Extraordinary Gentlemen in 2003. However satisfying or unsatisfying this version of Tom might seem, or however true to Twain’s original depiction of Tom Twain enthusiasts might find him, Twain himself never seemed able to find a use for Tom as a grown man. Until A Connecticut Yankee in King Arthur’s Court.

While Hank Morgan does not share the Tom Sawyer name, he retains the character, and can be interpreted as a reincarnation of Tom as a grown up. In that novel, Hank, a nineteenth century entrepreneur, is dropped into sixth century Camelot, and must make his way the best he can. Hank uses his superior knowledge of history, science, and manufacturing to gain the position of “Boss” in Arthur’s kingdom. Such knowledge alone, however, is not enough for Morgan. In besting Merlin and transforming the sixth century into the nineteenth, Hank adds the same “fancy touches” that so distinguish Tom in the earlier texts. He usurps the “power” of an eclipse to gain freedom from his dungeon, blows up Merlin’s castle with fireworks aplenty to boggle the minds of the populace, and creates spectacular special effects after repairing the Fountain of Holiness. Throughout the novel, Morgan constantly eschews the simple and direct, preferring the showy, spectacular effect. By the end of the story, however, his love of the spectacular, instead of becoming the crowning jewel of a triumph, comes back to haunt him. He and Arthur are taken as slaves, and in making his spectacular, showy escape, he very nearly gets the King hung for his trouble. After realizing that the other slaves have been taken up to be hung after the murder of the slave trader, Hank says:

Well, I had gone and spoiled it again, made another mistake. A double one, in fact. There were plenty of ways to get rid of that officer by some simple and plausible device, but no, I must pick out a picturesque one; it is the crying defect of my character. And then I had ordered my procedure upon what that officer, being human, would naturally do; whereas when you are least expecting it, a man will now and then go and do the very thing that is not natural for him to do. (CY 372)

Morgan’s Tom Sawyer-like style has gotten both himself and Arthur into trouble; they are only saved by Clarence’s own swaggering effect: sending the knights on bicycles. This shortsighted, egocentric penchant for spectacle plagues Hank to the final scene of devastation. Hank and his fifty-four boys, with the help of electric fence and gatling guns, annihilate 25,000 knights and are the victors of the Battle of the Sand-Belt; but as a consequence of the piled up bodies of knights, they become trapped in their cave, and die a slow death (from which Hank himself is saved by Merlin’s magic), poisoned by the decomposing bodies of the dead. 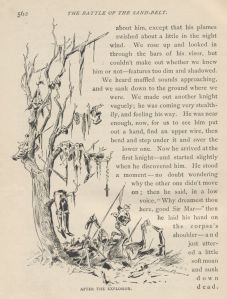 Perhaps there is a very good reason why Twain could never satisfactorily resurrect Tom Sawyer in his later works with success. The elaborate and showy plans of an imaginative boy, bolstered by the “authority” of nineteenth century authors like Alexandre Dumas, may seem precocious in youth, but in a grown man become egotistical sham, and result only in tragedy. As a successfully rendered character, Tom must remain a boy. 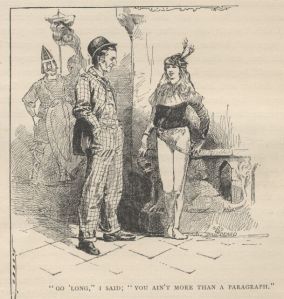