Craft and Magic on the U.S. Comedy Club Stage

This post is about the interplay between Craft and Magic on the U.S. comedy club circuit. My interest in this topic grows out of a larger ethnographic study of the lives of Road Comics, those professional standup comedians who earn their living playing the comedy club circuit across the central states. These are not the comics you see on stages in New York or Los Angeles, or on cable shows broadcast from these two coastal media hubs. The comics I am interested in are working the road, generally playing to working class audiences and are themselves working class.

In 2012 I produced a documentary, Road Comics: Big Work on Small Stages, that follows the creativity and passion of road comics working clubs and bars in the “flyover zones” of middle America. Two of the comics featured in the film, Kristin Key and Stewart Huff, are also featured in this post. I encourage you to watch the film to see more of their performances, as well as those of another talented comedian, Tim Northern, and to experience their stories from the road as they tell them. After a lively year of festival screenings, including at the Friars Club Comedy Film Festival in New York City, the full film is now available free for streaming and downloading at www.roadcomicsmovie.com.

By Craft here I mean all that such comics do to keep themselves in work: a well-crafted show not only has audiences laughing but also demonstrates to club owners and bookers that a comic can regularly make this happen. Repeat bookings depend on a comic knowing how to work a room. Craft involves all the calculations that make Magic possible; the purpose of honing one’s Craft is to have the opportunity to continue making Magic.

Magic is what happens when work works. I am particularly interested here in the many transformations a live comedy event makes possible, from how on stage comics can become someone other than themselves, to how an audience laughs here at matters too painful to confront elsewhere.

The terms Craft & Magic are tightly intertwined, and I separate them here simply to be able to point out the multiple levels on which a successful comic must think while onstage working a room. I am interested in the tension between planning and spontaneity, between the known and the unknown, between the scripted and the emergent. Craft provides the rigging on which Magic builds, and structures the structured improvisation that is live stand-up in performance.

To demonstrate my argument I’ll focus primarily on an aspect of Craft that comes into play in the first few minutes of a set: the performer’s assessment of the crowd.[1] To be successful a comic must read the crowd right. This is particularly important in road comedy, where performers work in different towns every week. Road comics have a few tricks, adding up to a set of fairly reliable tools, to help them do this. Here then is a two-and-a-half-minute clip of the successful beginning of a set into which is packed a tremendous amount of information. Here is comedian Kristin Key using the first few minutes of a 2008 show in Louisville, Kentucky, to assess the crowd and to simultaneously let them know that she is doing just that. (Note that the Emcee’s introduction is not well lit, so bear with the first minute of footage until the headliner arrives and the lights cooperate.)

What this clip shows us:

The Emcee is charged with introducing the comic’s bonafides, thus instructing the audience in the appreciation of professional qualifications as well as in what constitutes such qualifications in a comedy club context. “A finalist on Last Comic Standing” demonstrates the umbilical cord that runs between cable television and the live club circuit, Last Comic Standing being a reality TV show broadcast on NBC in which comics compete against each other; “and a regular on The Bob & Tom Show,” refers to a more locally-based radio show that promotes regional comics (the show is produced in Indianapolis and regularly brings comics who will perform locally that weekend as guests on their show Friday mornings). In announcing these credits, the Emcee’s words set Kristin up as a comic who has both national appeal and regional experience.

Caption: The assessment process begins with the exchange of a few whispered words, as the emcee hands the stage over to comedian Kristin Key during a 2008 show in Louisville, Ky. 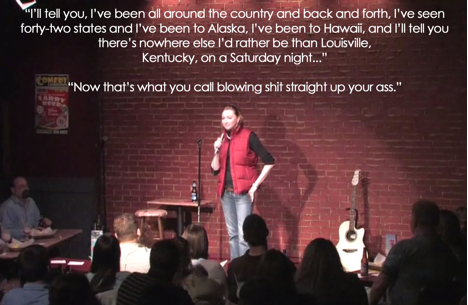 Caption: Key establishes her road comic persona during her introduction. 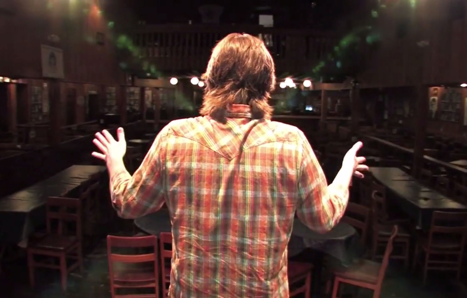 Caption: Comedian Stewart Huff on the transformative power of the stage.

It is to the subject of transformation that I now briefly turn.

I mentioned at the outset that my interest in the Craft of the stand-up comic derives from my appreciation of the larger phenomenon it makes possible, that is, the onstage Magic of good live stand-up comedy. Yet thus far I have not attended at all to what I mean by Magic, apart from noting it as the reason to bother perfecting Craft at all. Craft requires comics to raise their own antennae to assess audience receptivity. In this heightened state of attention, in the mutuality of their regard, both comic and audience are free to experience some degree of transformation. Many comics experience a liberating transformation into another, or even several other, personae onstage. Audience members too transform: often a couple arrives stressed, perhaps not speaking to each other, and leaves relaxed and holding hands (and quite possibly drunk). But whether they are drinking or not, the comedic realm they enter together affects both parties in this dance. They join in a sphere of communication marked as informal (come as you are) off-the-record (you can swear here), just-between-us (we are sharing everyday intimacies), live (here we are!) and face-to-face (I see you, this is not TV). In such a marked realm the comedian becomes our guide into an alternate, albeit temporary, world where strangers interact as intimates. Here confession, while framed as comedy, nevertheless retains some of the transformative power of redemption.

Here is Kristin on her experience of the transformative power of stand-up.

What I find striking here is Kristin’s continuing sense of awe regarding what the comedy stage makes possible for her. It still seems to surprise her, after more than a decade as a professional road comic: the feisty dom she finds in herself onstage is utterly different from the polite, friendly Southern girl she is in everyday life, who would never proudly proclaim herself as “blowing shit up your ass” – even if she were.

I’d like to add the voice of another road comic to this discussion of the transformative power of stand-up. He is Stewart Huff, another Southern comic, who is renowned for his storytelling style and his earnest generosity.

The sentiments that both Key and Huff express here are echoed in many more famous comedians’ autobiographical accounts of their experiences performing stand-up, including Dick Gregory, Steve Martin, Jerry Seinfeld, Rosanne Barr and Joan Rivers. In all these accounts there is a palpable feeling of awe at the transformations made possible by the standup stage. They turn into confident, bold, feisty figures who are utterly different from the polite and nice, or insecure and shy, people they are (or perform) in the “reality” of their everyday lives. In her onstage incarnation, Kristin Key proudly proclaims that she is “blowing shit straight up your ass,” from which moment on nobody dares mess with her. And in his transformed state as the plucky blue bird he so deeply admires, Stewart Huff, rising to the occasion of embodying our mutual liberatory potential, dances.

Susan Seizer is a cultural anthropologist in the Department of Communication and Culture at Indiana University. Road Comics: Big Work on Small Stages is the first film she has produced.

Acknowledgements: The ideas offered here were first developed in papers given in 2011, at the International Society for Humor Studies annual meetings held at Boston University in July, and then again at the American Anthropology Association annual meetings held in Montreal, Canada in November. Subsequently I have presented this material at the Invited Speakers Series, Institute of Ethnology, Academia Sinica, Taipei, Taiwan in May 2013, and to three batches of undergraduate students enrolled in an English Department class on comedy at Indiana University in 2013 and 2014. I want to thank all of the organizers and audiences at these events, and specifically Graham Jones and Gabriella Coleman, who organized the excellent AAA panel on Craft & Craftiness that served to focus my thoughts on the crafty dimensions of magic. The multi-talented Nikki Pinney has helped translate my content to this blogospheric venue, which thanks to Tracy Wuster looks so damn good.

[1] In an insightful essay on political parody and public culture, Robert Hariman notes that audiences for stand-up are a particularly play-ready cast: “the comic quickly establishes that the audience is unruly, mixed, possibly drunk or stoned, maybe crazy, and at times also perhaps stupid, deluded, out of work, or otherwise deviant from the norms of serious, respectable, daytime routine.” Hariman’s point is that comedy co-creates a “carnivalesque spectatorship” that is based on the comic externalizing all those qualities of human bodily, and bawdy, earthiness we all share (Hariman 2008:255). I am interested in mooring this general point in the specifics of crowd assessment as it actually occurs in a live comedy show by demonstrating how the particulars of context play into a given performance.

[2] This may well have been spontaneous play, as this story told by the Emcee and the persona Kristin inhabits in response to it were not repeated in either of the other two shows performed at the club that night. I cannot vouch however for whether this sequence was repeated in any of the other shows that weekend.

[3] “Competence in performance” has been a centrally useful concept for analyzing the art of verbal performance in sociolinguistic anthropology. See Bauman 1975, and Briggs 1988.