They say humor is based on timing. Yes, as is everything else. Ask Elisha Gray about telephone patents. I was plugging along, working on a piece about the comedian Dana Gould, and still figuring out when I would finish writing about Mark Twain and the German language, when an article in my local newspaper caught my attention:

The fact that there’s an actual Dead Poets Society prompts visions of Ethan Hawkes’s teeth and an involuntary desire to kill Robert Sean Leonard. Swallowing my bile I learned that the current founder, Walter Skold of Freeport (Maine), has visited the gravesites of 300 poets “ahead of this weekend’s fourth annual Dead Poets Remembrance Day.”

What is “Dead Poets Remembrance Day”? Apparently, “with the help of 13 current and past state poets laureate,” Skold was able to dedicate October 7—“the day that Edgar Allan Poe died and James Whitcomb Riley was born—to heightening public awareness of the art of poetry.

The article posted October 5. That was Saturday. Making the actual memorial day a Monday. Today. My day to submit. So in honor of dead poets everywhere (and as one who writes the occasional verse and considers the artform dead, and therefore all practitioners the undead) let us examine the two poets tied to this day. What the article does not share is an appreciation for not just the day, but the year. On October 7, 1849, as Edgar Allan Poe lay dying of possibly drunken Rabies in a Baltimore medical college, James Whitcomb Riley was borning in Greenfield, Indiana. 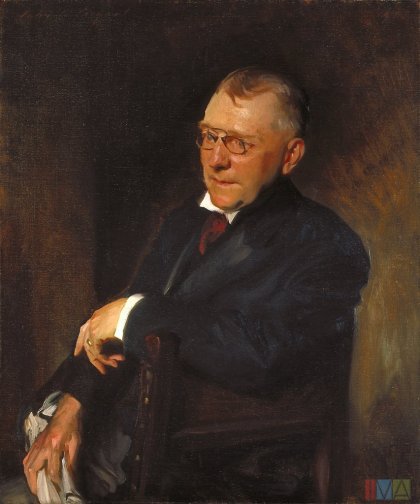 The coincidence must have made a later impression, as Riley formulated a hoax involving his predecessor’s poetry in 1877. At the age of 27, with little success breaking into Eastern periodical markets, Riley laid the groundwork to prove his poetry was just as good as a poet of reputation: namely, Edgar Allan Poe. Riley wrote an original poem, “Leonainie,” and built it into a story involving the discovery of a book, and the young pale stranger who poetically vandalized the book fifty years earlier ending his verse with the initials E.A.P. You can learn more about Riley’s conspiracy here, on a webpage dedicated to “America’s Most Famous Hoax Poem.” Riley’s attempt to legitimize this forgery locally (in the Kokomo Dispatch), hoping it would then get picked up in Eastern markets, was a tremendous failure. What little attention it received as a lost original of Poe’s deemed it spurious by artistic inferiority. You be the judge:

Leonainie—Angels named her;
And they took the light
Of the laughing stars and framed her
In a smile of white;
And they made her hair of gloomy
Midnight, and her eyes of bloomy
Moonshine, and they brought her to me
In the solemn night.—

In a solemn night of summer,
When my heart of gloom
Blossomed up to greet the comer
Like a rose in bloom;
All forebodings that distressed me
I forgot as Joy caressed me—
(Lying Joy! that caught and pressed me
In the arms of doom!)

Only spake the little lisper
In the Angel-tongue;
Yet I, listening, heard her whisper,—
“Songs are only sung
Here below that they may grieve you—
Tales but told you to deceive you—
So must Leonainie leave you
While her love is young.”

Then God smiled and it was morning.
Matchless and supreme
Heaven’s glory seemed adorning
Earth with its esteem:
Every heart but mine seemed gifted
With the voice of prayer, and lifted
Where my Leonainie drifted
From me like a dream.

When the truth came out of its modern authorship, Riley lost his local newspaper job at the Anderson Democrat. But timing is everything. The use of humor in the travelling lecture circuit became a cottage industry after the Civil War. In spite of his local notoriety, Riley applied his sense of humor (and an entrance fee with a fraction of indentured earnings committed thereafter) to the travelling platform, and developed a reputation that eventually garnered him national attention. His poetry made it into Eastern periodicals, proving celebrity can overcome incidentals like critical reception. Take that, Poe!

In fact “Leonainie” is not the only poem James Whitcomb ever wrote in spiritual relationship with that of Edgar Allan. Modern comedians use terms like “essence” or “drive shaft” when defining the limit of original work (and proscribing the offender who’s crossed it), as modern literary critics argue where allusion ends and plagiarism begins. Conclusions are seemingly as concrete as the Supreme Court’s opinion on obscenity: we know it when we see it. Feel free to take this online test to see for yourself the overlap of Riley’s verse on top of Poe. 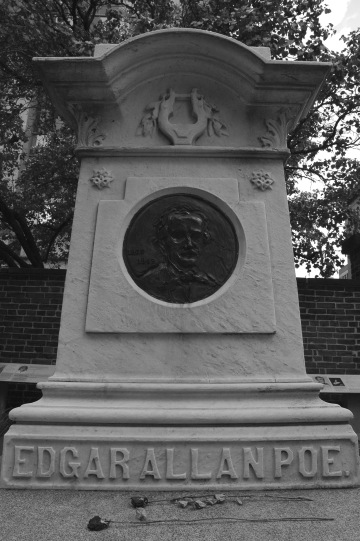 Every rose has its thorn

As for the Bard of Baltimore (by way of Boston and Richmond), his work continues to thrill the dwindling literates of our modern digital age, especially in the month of October. While none would argue for the visage of Poe on our Mount Rushmore of Comedy, Donald Barlow Stauffer did convince me that the poet was not destitute of humor. Black humor is humor. Even psychological torture can be funny, and no one showed that better than The Simpsons in their first Treehouse of Horror.

Feel free to press play on the Youtube link below to listen adapted as you read unabridged. Or you may just watch it as a video here, you filthy vandal.

Once upon a midnight dreary, while I pondered, weak and weary,
Over many a quaint and curious volume of forgotten lore—
While I nodded, nearly napping, suddenly there came a tapping,
As of some one gently rapping, rapping at my chamber door.
“ ’Tis some visitor,” I muttered, “tapping at my chamber door—
Only this and nothing more.”

Ah, distinctly I remember it was in the bleak December,
And each separate dying ember wrought its ghost upon the floor.
Eagerly I wished the morrow;—vainly I had sought to borrow
From my books surcease of sorrow—sorrow for the lost Lenore—
For the rare and radiant maiden whom the angels name Lenore—
Nameless here for evermore.

Presently my soul grew stronger; hesitating then no longer,
“Sir,” said I, “or Madam, truly your forgiveness I implore;
But the fact is I was napping, and so gently you came rapping,
And so faintly you came tapping, tapping at my chamber door,
That I scarce was sure I heard you”—here I opened wide the door;—
Darkness there and nothing more.

Deep into that darkness peering, long I stood there wondering, fearing,
Doubting, dreaming dreams no mortals ever dared to dream before;
But the silence was unbroken, and the stillness gave no token,
And the only word there spoken was the whispered word, “Lenore!”
This I whispered, and an echo murmured back the word, “Lenore!”—
Merely this and nothing more.

Open here I flung the shutter, when, with many a flirt and flutter,
In there stepped a stately Raven of the saintly days of yore.
Not the least obeisance made he; not a minute stopped or stayed he;
But, with mien of lord or lady, perched above my chamber door—
Perched upon a bust of Pallas just above my chamber door—
Perched, and sat, and nothing more.

Then this ebony bird beguiling my sad fancy into smiling,
By the grave and stern decorum of the countenance it wore,
“Though thy crest be shorn and shaven, thou,” I said, “art sure no craven,
Ghastly grim and ancient Raven wandering from the Nightly shore—
Tell me what thy lordly name is on the Night’s Plutonian shore!”
Quoth the Raven, “Nevermore.”

Much I marvelled this ungainly fowl to hear discourse so plainly,
Though its answer little meaning—little relevancy bore;
For we cannot help agreeing that no living human being
Ever yet was blessed with seeing bird above his chamber door—
Bird or beast upon the sculptured bust above his chamber door,
With such name as “Nevermore.”

But the Raven, sitting lonely on the placid bust, spoke only
That one word, as if his soul in that one word he did outpour.
Nothing farther then he uttered; not a feather then he fluttered—
Till I scarcely more than muttered “Other friends have flown before—
On the morrow he will leave me as my Hopes have flown before.”
Then the bird said, “Nevermore.”

Startled at the stillness broken by reply so aptly spoken,
“Doubtless,” said I, “what it utters is its only stock and store,
Caught from some unhappy master whom unmerciful Disaster
Followed fast and followed faster till his songs one burden bore—
Till the dirges of his Hope that melancholy burden bore
Of ‘Never—nevermore.’ ”

But the Raven still beguiling all my sad soul into smiling,
Straight I wheeled a cushioned seat in front of bird and bust and door;
Then, upon the velvet sinking, I betook myself to linking
Fancy unto fancy, thinking what this ominous bird of yore—
What this grim, ungainly, ghastly, gaunt and ominous bird of yore
Meant in croaking “Nevermore.”

This I sat engaged in guessing, but no syllable expressing
To the fowl whose fiery eyes now burned into my bosom’s core;
This and more I sat divining, with my head at ease reclining
On the cushion’s velvet lining that the lamp-light gloated o’er,
But whose velvet violet lining with the lamp-light gloating o’er
She shall press, ah, nevermore!

Then, methought, the air grew denser, perfumed from an unseen censer
Swung by Seraphim whose foot-falls tinkled on the tufted floor.
“Wretch,” I cried, “thy God hath lent thee—by these angels he hath sent thee
Respite—respite and nepenthe from thy memories of Lenore!
Quaff, oh quaff this kind nepenthe and forget this lost Lenore!”
Quoth the Raven, “Nevermore.”

“Prophet!” said I, “thing of evil!—prophet still, if bird or devil!—
Whether Tempter sent, or whether tempest tossed thee here ashore,
Desolate, yet all undaunted, on this desert land enchanted—
On this home by Horror haunted,—tell me truly, I implore—
Is there—is there balm in Gilead?—tell me—tell me, I implore!”
Quoth the Raven “Nevermore.”

“Be that word our sign in parting, bird or fiend!” I shrieked, upstarting—
“Get thee back into the tempest and the Night’s Plutonian shore!
Leave no black plume as a token of that lie thy soul hath spoken!
Leave my loneliness unbroken!—quit the bust above my door!
Take thy beak from out my heart, and take thy form from off my door!”
Quoth the Raven, “Nevermore.”

And the Raven, never flitting, still is sitting, still is sitting
On the pallid bust of Pallas just above my chamber door;
And his eyes have all the seeming of a demon’s that is dreaming,
And the lamp-light o’er him streaming throws his shadow on the floor;
And my soul from out that shadow that lies floating on the floor
Shall be lifted—nevermore!

Death is only the beginning…of a joke