Ask a Slave: The Exasperating World of Teaching Tourists about American Slavery 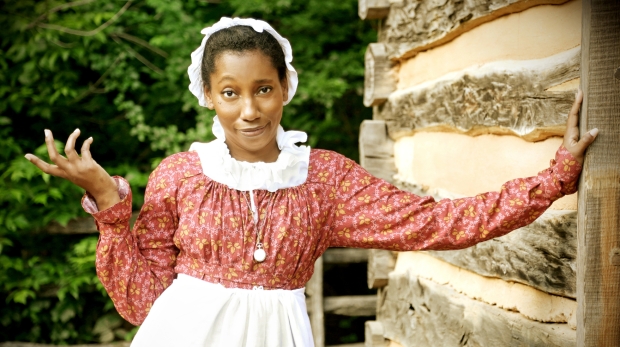 Tourists say the dumbest things. They travel the globe ostensibly to learn and to gain experiences so that when they return home they can do so as more well-rounded and informed human beings. Well, that’s the dream anyway. Tourists are always out of place, they are often pretending to be (much) smarter than they are, and they carry with them a sense of entitlement–all of these factors set them up to be perennially funny as objects of ridicule. Few things are funnier than ignorance, but when it combines with arrogance, then a wonderfully silly comic star is born: the American tourist, a figure of derision for about hundred and fifty years now.

It was Mark Twain who first popularized and perfected the American tourist, in his best-selling The Innocents Abroad in 1869, a narrative of a bumbling five-month tour–America’s first pleasure cruise–across the Atlantic and around the Mediterranean Sea to see the “Old World.”  He later built on that persona in other travel books like A Tramp Abroad (1880) and Following the Equator (1897). Twain captured the perils of tourism in many ways, but one of his most effective and hilarious shticks was to mock the inherent ignorance and arrogance of tourists simply by reporting what they said.

Tourists say the dumbest things. Just ask Azie Dungey, an actor who, while looking for stage work in the Washington D.C. area, found roles, as she puts it, playing “every black woman of note that ever lived. From Harriet Tubman to Diane Nash to Claudette Colvin to Carline Branham–Martha Washington’s enslaved Lady’s maid.” Readers here may be too timid to ask this: Is that THE Martha Washington, President George Washington’s wife? Yup. History is fun. Ms. Dungey, during the energy and optimism infused into the presidential election of 2008 and throughout President Obama’s first term, Azie Dungey supported herself by playing a slave who served the first, first family. American irony at its best.

Her role is as “Lizzie May,” a fictional character drawn from Ms. Dungey’s experiences performing as a slave woman at George and Martha Washington’s home named Mount Vernon, now a popular tourist site. And her forum is Ask a Slave: The Web Series. The short sketches recreate many of the questions that tourists posed to Ms. Dungey over the years. Ask a Slave is promoted as “Real Questions, Real Comedy.” It will make you cringe.

When tourists reveal their ignorance and arrogance, we have what is called in the profession “a teachable moment.” A traditional method of trying to encourage a learning process is called the Socratic Method, named after Socrates that famous smart guy from ancient Greece. He is dead now. The method involves getting people to ask questions and from the answers to encourage more questions and thereby lead to the gathering of knowledge–and, from that process, achieve the gaining of wisdom. Or something like that. Tourists all over the United States (and the world, for that matter) are often encouraged to ask questions of their guides. At many historical sites, guides are often complemented by historical re-enactors to create “living history.” It is an appealing bit of stage craft.  “All of history is but a stage, and we are merely reenactors and tourists.” Shakespeare wrote something along those lines. I just updated it.

But when the questions are so clueless, what’s a slave to do?

Well, the actor Azie Dungey performed her role to the best of her ability (and with much patience), but all the while she collected information, and now, as Lizzie May, she has some different answers to give. She, with the help of other members of the crew, are re-enacting those tourist re-enactments and providing the rest of us with our own funny teachable moments. The first episode immediately reveals why the online comedy series has caught fire.

Lizzie May is a significant expansion of the role that Ms. Dungey played at Mount Vernon. She is able to provide answers that would have gotten her fired at Mount Vernon, all the while maintaining a demeanor that is seemingly polite and deferential and that the original role demanded. Yet the answers are assertive and thus subversive. She thereby provides a compelling satirical voice. The resulting humor is well worth viewers’ time and offers us our own teachable moments.

Ignorance is funny. It has always been funny because it provides us the wonderful opportunity to laugh at someone else’s stupidity. Fortunately, there is an endless supply of it, so humorists can always find some facet of human behavior to exploit for laughs. When the subject matter is tied to the legacies of slavery, the humor has an unavoidable edge. One thing that the tourist questions reveal beyond their stupidity is a desperation for self-affirmation, or an almost pathological need to lessen the horror of slavery, to give many modern tourists more distance from the slaveowners and supremacists in their racial family tree. The need is understandable; the ongoing moral cowardice, however, is tiresome to say the least.

Sometimes ignorance can be instructive and funny at the same time. Yes, tourists ask the dumbest questions. But–and this may upset people more than anything else in this post–we are all tourists. The key, then, is for us to listen to the answers from time to time. It may help us improve our questions. But first, we much recognize how terribly ignorant some of our questions can be.

Ms. Dungey writes about the series and her desire: “Though this is a comedy, it is my hope to honor the memory of those people who struggled and survived through their uncanny intelligence, their strength, their love, and…laughter.” Yes. And for all others bound by our inevitable connections to American slavery, “Ask a Slave” provides useful answers. For those tourists of European heritage heading to Mount Vernon, be sure to talk to the re-enactors and learn from their answers, but, for the love of the best of what George Washington represents, don’t “ask a slave” if she has white friends. OK?