The First Obama-Romney Debate: A Roundup of Recent Cartoons

Like many entitled victims in America, I woke up on Thursday morning and didn’t go to work. Sure, technically Thursday is the only day that I don’t have to be at any of my three jobs. Okay, and sure, maybe I was a little hung over from attempting to reach across the aisle and take a bipartisan approach to the debate drinking game the night before (which, like voting itself, I now realize is something for which you really have to choose just one candidate), but Thursday morning I was at home, partially caffeinated, and immediately online with the hope of un-drowning my sorrows in a little debate humor. Because the candidates themselves didn’t exactly bring the laughs. Obama’s opening bit about his anniversary got a chuckle, to which Romney replied rabidly with what felt like the only words that he had not literally committed to memory, and which  ended up being almost exactly the same joke that Obama told, and which somehow got a bigger laugh. A little later on, Obama said something about Donald Trump not liking to think about himself as “small anything,” which I think I misinterpreted at the time as way more risqué than it turns out to have been.  (And to which I may or may not have shouted “Oh snap!” Like I said: drinking.)

The debate itself was a mess. Romney all up in Obama’s business, Obama pusillanimous and punching-baggy, Lehrer a tired daffodil trampled underfoot. And although Romney never seemed to not be smiling eerily (which Stephen Colbert noticed as well), the occasion wasn’t actually all that fun. Fortunately, Twitter was paroxysmal with activity, much of it absolutely incisive or congressionally incoherent. At one point, the words “Big Bird” were being tweeted at a rate of 17,000 tweets per minute. The beloved creature’s renewed popularity, however, comes at the expense of his own future demise: under a Romney administration, Sesame Street would be out on the street. The response was swift and frequently pretty hilarious.

Here, then, are some of the mid- to post-debate cartoons, memes, and tweets. It’s worth noting, of course, that the widespread attention to Romney’s remarks about Big Bird is distracting at best, particularly in light of more pressing national concerns and especially considering that Sesame Street is pretty much technically immune to whatever puppet death panel the Republican nominee had in mind. 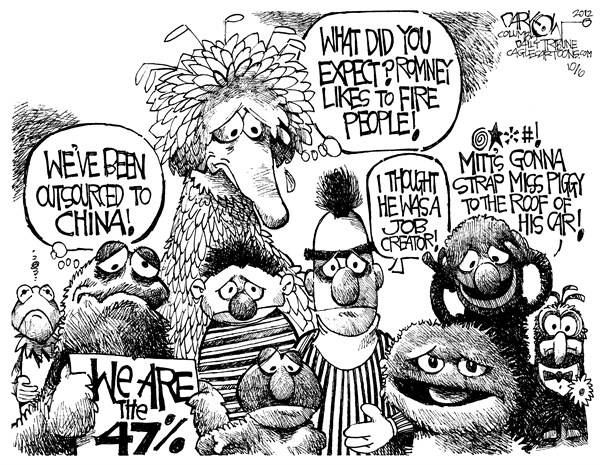 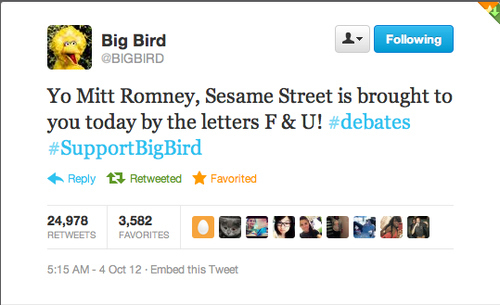 Although it’s safe to assume that the explosion of Twitter accounts putatively penned by “Big Bird” are in fact the work of well-meaning and often not-exactly-SFW imposters, SNL was able to secure a guest appearance by the bird himself a few nights later:

And rounding out our selection on Big Bird is a cartoon by Cameron Cardow that would later play out almost literally in real-life; in a televised interview with Piers Morgan, Republican non-nominee Rick Santorum reinforced his own stance on the value of public broadcasting, adding that it is entirely possible to both kill and eat the things that you love.

Although Barry Blitt’s New Yorker cover is perhaps the highest profile use of the “empty chair” metaphor from Clint Eastwood’s RNC convention speech that, in retrospect, seems surprisingly prescient (and less, you know… inscrutable), the magazine is certainly not the only one to recognize the new relevance of this image. 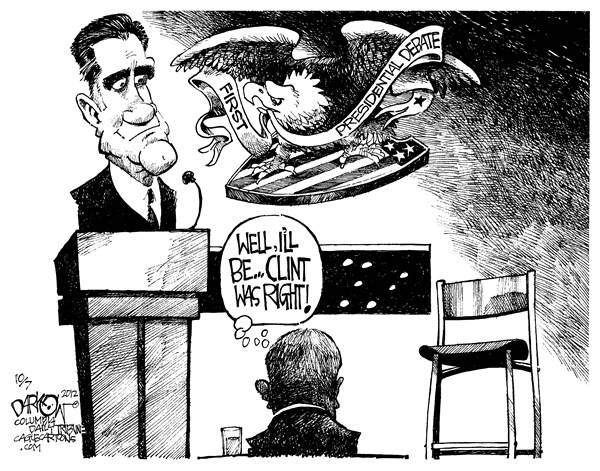 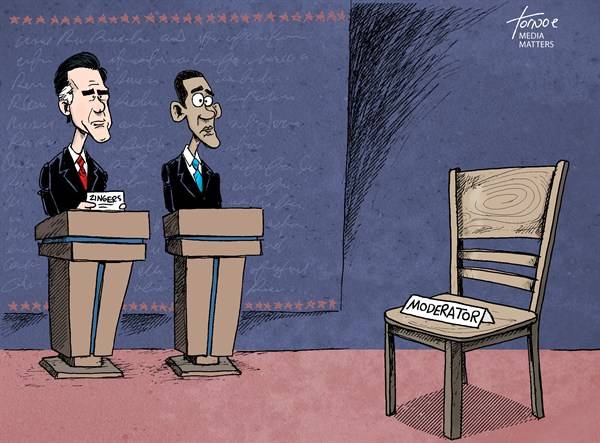 And finally, two kinds of piles.